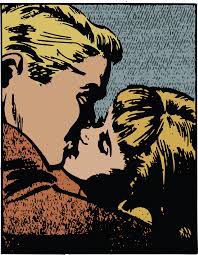 So you already know that the first kiss was out of this world!!  But what happened after that magical kiss?

Obviously, our first meeting went superbly.  We did finally have dinner once we quit making a spectacle of ourselves in the hotel lobby.  I suppose because we had already spoken daily in some form or fashion, we were instantly comfortable talking with each other face to face.  There was not one thing about him that I didn’t adore……his smell, the way he spoke, his incredibly hypnotizing eyes, his sense of humor, his attention to detail, the way he listened to every single thing I said.  He was unreal!! Our first date was like a fairy tale.

Luckily, we already had our second date planned, the trip planned to LA the very next weekend.

Mind you, this was only the second time we were meeting in person, but we would spend almost 3 days together!  Taking a “trip” together is usually something couples do a little later in the relationship, not for a second date. As you may or may not be aware vacations can make or break a couple! If you are in a new relationship and want to know “where it is going”, take a trip together.  If you still want to see each other after going home, you have a great chance of making it.  However, living in two separate continents didn’t give us the luxury to time and thus called for bending the rules.

As expected, we were beyond excited the moment we met up in LA!  We rented a convertible mustang and cruised all the main sight seeing places around LA….the Hollywood sign, Beverly Hills, Rodeo Drive, Venice Beach, Malibu, etc.  We had the most amazing time seeing the sights, talking, getting lost driving and finding our way again.

We did have one awkward moment.  There are thousands of employees with his company so it’s rare for them to fly with someone they know.  It may not happen for years. Tinder was not quite as popular in France as the US.  However French Charming had “matched” with a woman in France before he and I had “matched”.  She lived in a city about an hour or so from where he was living.  At the time of their online “meeting” he had told her they lived too far apart for it to work and they never went out.  Low and behold who was part of the crew to LA with him??  You guessed it!  He didn’t even know she worked for the same company, but recognized her as the crew met before the flight.  The awkward part came when I showed up.  French Charming had met me in the hotel lobby and was escorting me through and there she sat with a couple other colleagues.  He introduced me….his girlfriend who lived in Houston, TX.   If looks could kill…we would have both been dead.

French Charming was everything I ever wanted in a man!  He was kind, intelligent, thoughtful, handsome, worldly, funny, and adventurous, and the chemistry between us was an exothermic reaction….if you understand chemistry.  I’m keeping my blog G rated (for all audiences).

I was so sad to say goodbye when we parted ways in Los Angeles.  I was already counting the days until I could see him again!  He had already requested a flight to Houston the next month so we knew we would get to spend one day together.

You are probably saying to yourself “a day??”  One day in a month?”.  Yes it’s true, it’s so little time together.  Any other man I had dated, that would have been the kiss of death. But for some reason, with French Charming, if one day was all I could have, one day would have to be enough. The crazy thing was, even though I wanted so much more time with him, I was elated to have that one day!!  We shared more in one day than most people do in a week who live with their spouses or significant others.

I’m telling you, when you find Mr/Ms Right….you can share a lifetime together in a day!  I know you are saying to yourself “but what about the other 29ish days?”.  What do you do with those?”