Since Halloween has just passed, it’s fitting to continue with the story of FT and “the wedding” because it’s something no one dreams about….ever!

So, we left off last time with FT giving me an ultimatum to marry him or break up…and somehow I agreed.  Mind you, it was not an ultimatum shrouded in a fake proposal. There was no “will you marry me?” or even a ring presented to me to somehow make it seem genuine.  No no no, it was “We either need to get married or we need to break up”.

Why I said okay is beyond me.  I can’t really remember how my teenage brain was processing the information.  I suppose I felt I was past the point of no return.  Meaning I had made a firm stance to choose him as my boyfriend against the advice and warnings of my family and to “abandon” him at this point would be admitting that they had been right.  {Pride is a dangerous thing combined with youth}

His family was so excited about the marriage.  My family was beside themselves with anger, disbelief and disappointment.  They didn’t have much time to talk me out of it as we made the “decision” to get married over the Christmas holiday and HE wanted the wedding to be in February (I think that might have been the month we met).

I hadn’t really thought or dreamed about the perfect wedding or even the perfect man as all of my dreams had only involved where I lived, what I drove, and the career and travel plans I had.  I hadn’t even begun dreaming of the perfect wedding. Now I was faced with having a wedding in 6 weeks so I didn’t have the time nor money to think about a perfect wedding at this point either.  Besides…how perfect can it be when it starts with an ultimatum, no ring, and a deadline?  We didn’t have extra money to have anything extravagant.  I had no idea how to plan a wedding or even what I wanted.  I was basically at the mercy of FT and his family for planning everything.  Being in the heart of the Bible Belt it was a given that we would have the ceremony at the little country church that his dad belonged to. Beyond that, there weren’t too many other things to plan.

His cousin was into baking and she agreed to make our wedding cake for free if we would just buy the ingredients.  FT chose the cake he wanted…a three tiered cake with a fountain on the bottom tier, stairways from the center tier out to four small heart shaped cakes on pedestals, and of course the top had a little bride and groom, that he also chose.  This was a cake that would easily serve 175-200 people, but with a month and a half to plan, announce, and invite, it was unlikely we would have more than half that many people attend. 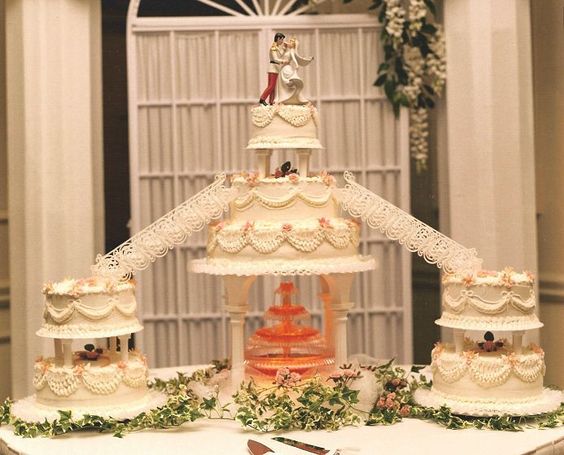 (Not our actual cake, but just to give a visual)

The wedding dress was borrowed from the friend of one of his friends.  It fit perfectly, however, it was not really something I would have chosen for myself.  It was very frilly, full of ruffles, high neck, and long sleeves.  It was, however, free, except for the price of having it cleaned afterwards…what could I say?

We went together to pick out rings.  We picked mine first…based on what was cheapest and on sale.  It wasn’t really something I would have chosen, but FT thought it was perfect.  It was a gold ring with a kind of wavy design, a tiny 1/16 carat diamond raised in the center with little diamond chips in the wavy design on each side.  He chose his ring next.  It was a rather large golden nugget ring with more total carat weight diamonds than my ring!  In fact, we had to apply for credit to pay it off over the next two years.

We rented the candelabras, flowers, and prayer bench, as well as the tuxedos and bridesmaid dresses.  The colors were simple….just pink.  Pink flowers, pink decorations, pink bridesmaid dresses.    The ceremony went off smoothly, without anyone objecting….sadly.  Though if you had taken pictures of the congregation, half looked as though they were attending a funeral.  That half would be my family.  Hindsight is always 20/20.  I so wished they would have objected.  But then again, I might not be where I am now. Plus, anyone who has teenagers knows, you can’t tell them anything…because they already know everything, right?

The wedding was on a Sunday afternoon, because it was a cheaper fee to clean the church on a Sunday and use the reception hall.  Oh, yes, the reception….it was held in the church “kitchen”.  You know…where they have pot lucks, bingo, and whatnot for church functions.  We didn’t have the time nor money to have a reception at a hotel with music and dancing.  Besides, I was only 19 and couldn’t drink alcohol.  Most of my friends were the same age.  The wedding was on a Sunday…in the Bible Belt…so no alcohol.  The wedding was in a Baptist church….baptists, for the most part, do not believe in dancing or drinking anyway.   So we had our reception in the little kitchen with the big paper decorative hearts and bells, the cake (that was entirely too big), a bowl full of mixed nuts, a bowl full of those pastel colored mints, and a punch bowl.  People passed through the line to congratulate us (or look at me with pity), get their cake and punch, and go sit at the long tables and benches of the church kitchen.  Needless to say, the reception didn’t last long.   Instead of packing up pieces of cake for people to take, we were packing up entire tiers of cake for people to take.

In small towns in the Bible Belt, people don’t give money for wedding gifts.  They give actual gifts.  We received salt and pepper shakers that were in the shape of chickens.  A napkin holder with chickens on it.  Kitchen linens with chickens.   Jello molds (does anyone actually make jello molds anymore?) that were in the shape of a chicken, a fish, and a decorative circle ring thingy.  I’m not sure where the chicken theme came from or if it was just the trend or style.  I’ve never decorated with chickens in my life.

We opened all our gifts when we got back from our honeymoon. The honeymoon……a fabulous week long trip to…North Carolina!!  Yes, we drove from Oklahoma to North Carolina in February.  Our first night as husband and wife was spent at the lovely….UNC…that’s right University of North Carolina, Raleigh-Durham, visiting his friend..and we stayed with his friend in the dorm!  I used the dormitory showers to get dressed the next morning.  It was so romantic, just the honeymoon I would have dreamed of,….NOT.  I suppose it matched the proposal.  Oh wait, the proposal was non-existent!  We went to the outer banks of North Carolina for a couple nights as well.   In February, on the beach, it was so…cold, windy, empty, and grey.  It was fitting because it was the description of the rest of our marriage.

Now I was married.  What was mine was his and what was his was mine, right?  What I found out was that included a whole lot of debt.   I mean A WHOLE LOT OF DEBT!!!

Have you ever found out things about your significant other after it was too late?  Did you get married and then find out things you had no idea about?  What did you do?  How did you deal with it?  Write me and let me know.

Stay tuned for Part 3 when you find out how I dealt with the debt and other things.