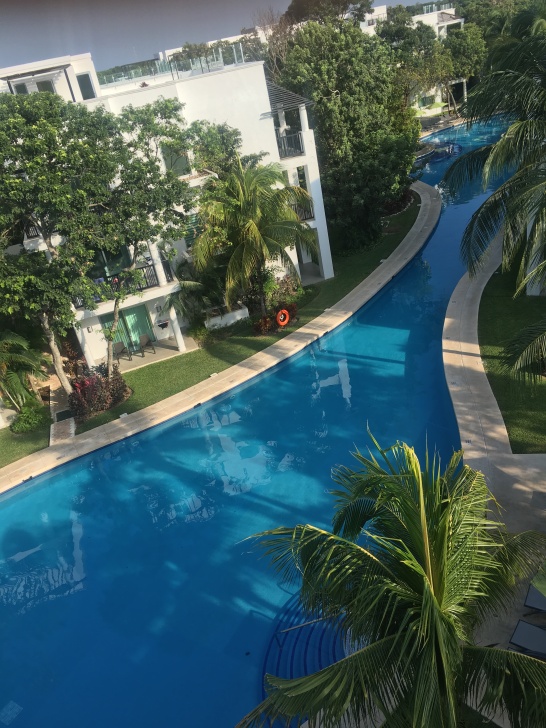 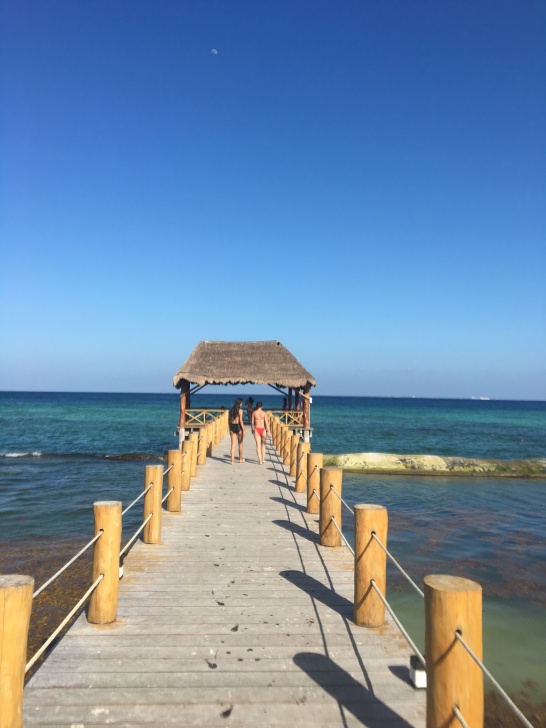 How do you think it went?

Let me tell you, I learned a harsh reality.  Family vacations by the beach are actually work disguised with tropical drinks and a beautiful view.  Family vacations are hard! Harder work than your job type of work because it’s 24/7!  I mean you get a tiny reprieve when the little buggers are sleeping…but then you get kicked out of the bar for bringing kids…even though they are sleeping! (Yes that really happened) It was a bar at a resort! And the kids were in a booth in the corner! We didn’t think the “no kids in bars” rule applied. 🤷‍♀️

Don’t get me wrong, it’s precious to see their little smiling faces light up when they do something they’ve never done before – like rappelling down into a cenoté and then swimming with the fish inside it.

But when that adventure is over, they are ready for another…immediately!  Were we all like that as kids?  I’m guessing the answer is “yes”.  French Charming’s kids adore him, and want to be with him always. I mean like right next to him.  That part was a little different in my childhood.

This made me think back to when I was young and we went on family vacations.  I mentioned that my parents typically only went as far as they could drive in a day.  Typically we went to the same place every year.  A little town in the Ozark Mountains of Missouri, called Branson.  We always stayed at the same resort.  Little brown log cabins with screened in porches all set around a huge pool. My parents got to know the owners and some of the same people that also visited each year.

Usually we would leave our house at 5 am or at least some time well before the sun came up.  Now that I’m older, I think that was so we would go back to sleep in the car and my parents could have a couple hours of peace before we started fighting in the backseat.  By the time we stopped for breakfast we only had a few more hours to go.  Depending on the route we took, breakfast was either at the McDonald’s that went over the tollway (which we thought was the coolest thing ever) or at this hillbilly roadside restaurant that I think was called Nickerson Farms.

Back in the car, awake, and full of sugar, my older brother and I would usually torture my younger brother in some form or fashion until we arrived at our destination.

Did we wake up at the crack of dawn every morning on vacation wanting to have breakfast and begin the adventures of the day?  Yes, sadly, I think we did.  I remember making coffee as that seemed to be the magic trick for getting the parents out of bed because we wanted to go to the pool…at 8:00 am!

We, however, did not try to be right next to our parents.  (My mom would have loved it if we would have tried to stayed glued to her.)   In fact, we were exactly the opposite! We tried to get as much distance as possible! For example, my mother cannot swim…so we played in the 8-12ft end of the pool.  We knew she couldn’t come after us there. We jumped off the high dive.  I did flips off the low dive.  My brothers would dive to the bottom of the pool and try to sit down there.  All the while my mother would be yelling at us.  It was quite embarrassing.

There were several years that my aunts, uncles, and cousins all came at the same time too.  It was a family reunion vacation!  This was great because the cousins all loved hanging out together, the aunts and uncles all loved sitting and talking (which kept our mother occupied and not constantly worrying where we were or what we were doing).

One year, we were all there for the week of the 4th of July.  Fireworks are legal in the state of Missouri and we had bought plenty!  The resort where we stayed was just a couple blocks from what looked like a river but was actually part of a lake.  Lake Taneycomo.  (It’s a cold water lake averaging 48℉/9℃).  It was great for fishing but not swimming as you can imagine.  We had decided to take our big bags of fireworks down by this river and shoot them as 1) it would be safe and 2) we could hear people shooting fireworks from the other side and it made an awesome echo like thunder rolling down the river.

I’m not sure how we managed to escape the visual limits of my mother (I have to think my aunts were responsible for that), but we did.  We found a nice concrete picnic table to set our huge collection of amateur pyrotechnics.   We shot bottle rockets and roman candles across the river.  We had an empty drive for the things that spun around on the ground.  It was all safe and somewhat organized……until…

Some of my younger cousins and my little brother had gotten the bright idea to hold the roman candles while they shot them.  (Not safe, I don’t recommend it, have seen many a hand injury/burn from them)  My little brother had lit his roman candle and was proudly holding it, aiming across the river.  The only problem was when he had pulled it out of the big brown paper bag containing all the fireworks, he stayed right there to light it.  He didn’t realize that as the paper of the roman candle burned it dropped pieces still burning down to the ground or in this case down to the paper bag.  All of the sudden one cousin yells “RUN!!!!!”  I looked just in time to see this huge orange ball of fire on the picnic table.  We all ran and hid behind trees or whatever we could find!  There were things shooting all over the place in every direction!  It sounded as though we were right in the middle of a huge artillery fire!  The echo from the river amplified it at least 10 times!  It seemed to go on forever but in actuality it was probably only 2 or 3 minutes.

When all the booms and zings and whooshes stopped, amid a huge white cloud of smoke that smelled of gunpowder, we came out of our hiding places, made sure no one was hurt, and then laughed hysterically.   Everyone said the same thing, “thank God your mom wasn’t here!”.   I think that might have given her a heart attack had she witnessed it.

Thinking of these vacation memories puts a huge smile on my face.  We did crazy things (usually without my mother being aware) and had so much fun.  Did we give our parents gray hair?  I’m sure of it!  It would have been worse if they knew everything!

Did we constantly ask “when are we going to..?” “when can we…?” “when are you going to…?”  Yes, shamefully, I think we did.  Did we leave our parents thinking “will nothing ever satisfy them?”  Probably.

Did we thank our parents for giving us these weeks of fun filled activities at the cost of their sleep, frazzled nerves, and hard earned wages?  Probably not nearly enough.

Was I always told “just wait until you have kids one day!”?  Yes, I was!  That may be why I never had any of my own!  However, now……to have French Charming….I also have his kids, and I’m so proud of that.  They are beautiful and smart and loving.

I had been thinking that Mini French Charming and Poupette are so different than the way my brothers and I were.  But, reflecting back on my vacations as a child, maybe they aren’t so different after all.  As we get older do we strategically forget some things of our childhood or do we just forget because we are older?  Why is it that we take things for granted when we are young?

As for French Family Vacation #2, it was beautiful, amazing, fun, and a learning experience for me.  I would say it was a huge success!  To come into a relationship with a ready-made family can be challenging.  All of the sudden there are multiple personalities to deal with, multiple moods that can change on a dime for no apparent reason, each person having their own direction in mind.   It can be overwhelming!

My take home lessons from FFV#2:  Learn to be patient – whatever moods, drama, disasters are going on will change in the course of 5 minutes.  Savor the quiet, drama free moments because it will change in the course of 5 minutes.  Take a deep breath and carry on.  Remember that one day (hopefully) the kids will be telling their kids about their family vacations when they were young with fond memories.

What kind of experiences have you had on family vacations, when you were young or as an adult?   Do you have any words of wisdom to share?  Let me hear from you!

9 thoughts on “After The Family Vacation”