You’ve heard the saying that “if something seems too good to be true, it probably is”?  This isn’t always the case and good things do happen.  However, I fell victim in this particular situation.  It happened to be during my trial on match.com.  I was just about to cancel my 3-month trial one month into it as I had really struggled finding anyone matching what I was looking for.  Then one day I see someone pop up as a potential match who actually fit all of my criteria!  He was handsome, running a family business which wasn’t too far away from where I was living, educated, etc.  We sent a few emails back and forth via match.com.  He asked a lot of questions about my childhood and where I’ve lived which seemed odd so early on.  I also noticed some glaring grammatical mistakes, but overlooked them.  Mind you, it’s easy to overlook little things when you are so hopeful about the “big picture”.  I did look up the business he said he ran, and it seemed legit.  I didn’t really search more than that.  Soon, he asked if he could call me. We spoke briefly on the phone because he said he was at work.  He had what seemed like a British accent and when asked he told me he had dual citizenship, both British and American.  The phone connection was horrible with lots of static even though he was calling from a city just 2 hours away and thus the conversations always ended quickly.  Within two weeks he had asked for my address so he could “send me something”.  I reluctantly gave it to him as I don’t give my address to people I haven’t met in person.  All my first online dates have been at a public rendezvous point with my own means of transportation.  I suppose I had hoped all he said was true.  We always want to believe the best while fearing the worst.  He sent me roses.

His company made pipe fittings for oil rigs and he said he had to leave for a couple weeks to go out to the oil rigs for business…thus delaying what would be our first meeting.  He sent me roses again, this time with a box of chocolates.  He called a couple more times but, again, the connection was horrible and the calls were short.  Call me a cynic, but sending flowers to a girl, and especially flowers and candy seemed a little outdated to me.  This made me a little suspicious.

As I became more and more suspicious I decided to investigate a little deeper.  First thing was the phone connection. The area code was one I didn’t recognize so I looked it up…Dallas, TX.  Odd, no mention of ever living in Dallas, and why was our connection always so horrible?  Something was starting to feel wrong.  The emails were too romantic for someone who had never met me face to face and never even FaceTimed or Skyped with me.  I started examining the photos of him closer.  They seemed a little too perfect.  Like a photo shoot type of perfect.  I questioned myself.  Was I talking myself into feeling all these warnings?  Was I self-sabotaging?  I talked to one of my good friends about my suspicions.  Together we started researching every detail.  She searched the high school records from where he said he attended school in England, no record.  He said he took over the family business when his father died.  I searched for the obituary, no death record.  We searched the business again.  The address from his website was just a tiny rented office space in Austin, TX.  With a little more research we found that there was a business exactly as he had described with the same name, taken over by the son after the father passed… but it was in California.  The final thing I found, for which I was so proud of myself, was the IP address from the email he had sent.  It was located in Somalia!!  I had seen the shows recently of people being scammed by online daters in which there had yet to be a face-to-face meet up and one person gets in some sort of “trouble” (ie they are out of town and their credit card doesn’t work etc) and they ask their new love interest for financial help, many times draining every extra cent they have.  The bells were alarming in my head!!  The red flags were waving in front of my eyes!!!  I was ashamed and afraid at the same time!  How could I have been so foolish?  This person knew my address and my name!  I had fallen victim to a scammer, a faker, a CATFISH!!  What was the next move?

I’ve always been one to confront issues and so I decided to confront this one as well.  I sent him an email stating only that I knew where he was and what he was doing.  I told him he should never contact me again.  He sent me an email in response saying he would tell me anything I wanted to know, he could trust me, and there was no need to be upset or suspicious.  I responded saying “I’ve traced your IP address, I’ve contacted my bank, credit cards, and most importantly my attorney.  Never contact me again or you will be sorry!”  I never heard from him again.  In the meantime my friend, who was helping with the mystery, had found the identity of the person in the photos from this man’s match.com profile.  The photos belonged to a Lebanese model.  At least I had good taste!!

What is the take home message? Well, it’s not to think that everyone is a liar or trying to scam you.  However, when something doesn’t feel right, dig a little deeper.  When you have warning signs….read them!  Be safe out there! 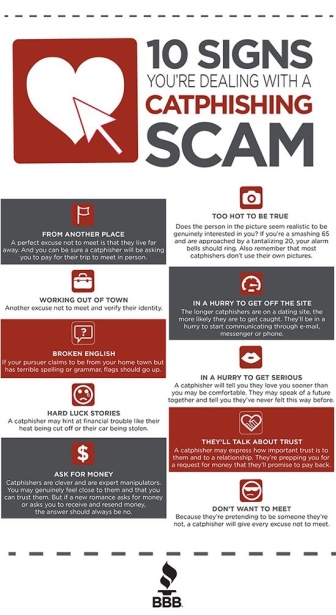 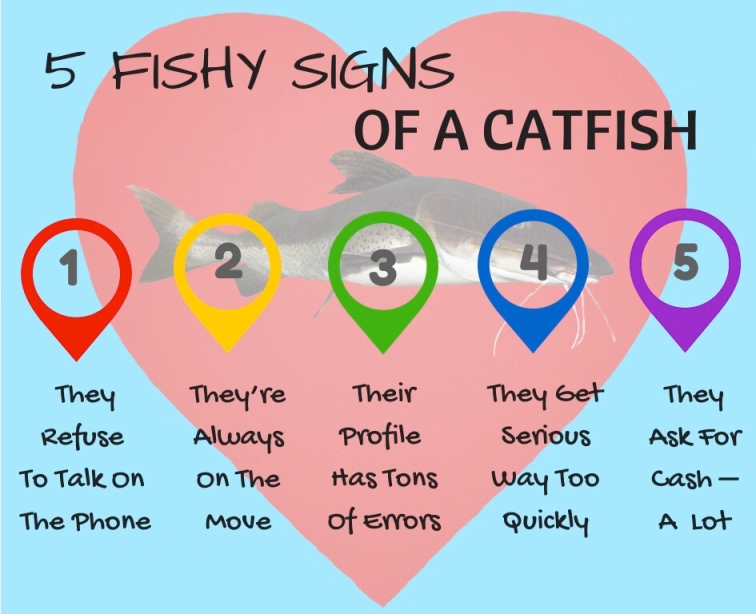 One thought on “I Was “Catfished””